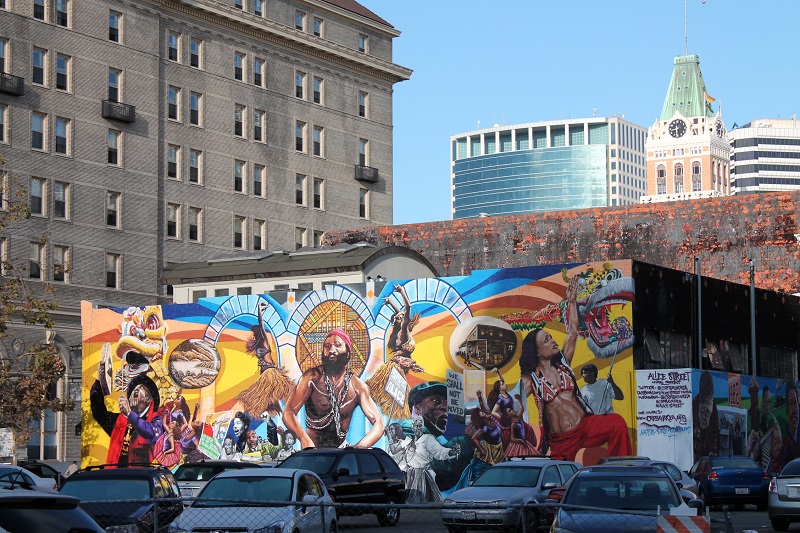 Removing Funding Barriers for Artists by Rethinking Grantmaking in the Arts

In response to the pandemic’s crippling effects on the artist community, the East Bay Fund for Artists (EBFA) team, currently comprised of Debrah Giles, Melody Rooshen, and Anyka Howard, needed to modify our grantmaking process to better serve our recipients. These modifications signified the understood importance of leading our funding efforts with a community-first mindset.

Prior to COVID-19 when EBFA, an initiative of the East Bay Community Foundation, rewrote the funding proposal, Giles and teammate David Pontecorvo, were intentional about planning future grantmaking opportunities that centered on priority populations like Black, Indigenous, and artists of color.

Precluding the focus shift was the foundation’s 2019 recommitment to its core purpose of supporting a range of artistic disciplines and artists that represent the East Bay’s racial and cultural diversity. Part of that recommitment meant rethinking the grantmaking process, including a now-nixed match funding requirement which precondition artists to raise a portion of their grant through solicitation of new money and/or in-kind contributions.

Giles – who, as Senior Program Officer, leads the foundation’s program strategy and grantmaking focused on arts and culture for social and racial justice, including EBFA – and Pontecorvo, eliminated the matching funding requirement, citing blurry lines between the requirement and EBCF’s substantial client base of nearly 500 individual donors and fundholders.

“[Grant matching was] nice in theory, but we were making the artists work for the money,” Giles says. “Are we opening our doors? Are we making our donors available to these artists? It didn’t make sense to me.” For small organizations and artists, a matching funding requirement can become a barrier.

Anyka Howard, Founder and Director of Betti Ono joined the EBFA team as a consultant in 2020. Howard, who has a strong background in the arts, understands the significance of the change, she adds, “Given the economic implications – loss of revenue for organizations and job loss for individuals – it became apparent that awardees would face significant barriers to making their grant match, resulting in the matching grant requirement being lifted.”

This critical change allows artists and organizations to focus on their craft and not on fundraising efforts, allowing for more room in their creative process. This change has been sustained in the 2021 round.

Giles and Howard continue seeking new ways to innovate the program. In November, the foundation announced $170,000 in awards for 16 artists whose proposed works focus on racial justice and a culturally affirming, multi-disciplinary approach.

A critical component of the Fund is supporting artists to create new work in the East Bay, where many artists – especially in financially tight times – may not otherwise have the capital to explore new works. While typical arts funding goes directly to a program or part of the artistic production, these grants range up to $16,000 to directly support the individual artists.

For this year’s judges panel, EBFA hired three community artists of various disciplines who each read and rated the proposals, compared scores, then began the discussion based on highest rankings.

Oakland-based transportation and mobility planner and EBFA judges panel member Brytanee Brown says the foundation has done a good job developing a grant-funding process. Brown says, “a commitment to social justice doesn’t live in the margins; it has to take center stage.” She adds, “I was drawn to those applications, individuals and organizations wanting to do the work but not having a home for it, and then seeing the opportunity with this fund, and unleashing their project or work.”

Each project speaks to social justice and the realities of communities hardest hit during the pandemic and racial justice movements. Selections offer an array of disciplines and perspectives including a full-length theatre production, revolutionary billboards, documentary films, a scripted digital series, and ancestral song and dance honoring the cultural legacies and histories of East Bay performance traditions.

Yvan Iturriaga leads one of the 16 selected projects. Iturriaga says EBFA funding will allow him to confront the abnormal realities of our times, he adds, “I’m honored and excited that the EBFA is supporting our subversive new series Normal Ain’t Normal.” When describing the Normal Ain’t Normal digital series, Iturriaga says, “Politicians and corporations may want everything to “go back to normal” but now is the time to challenge all the brutal inequality and injustice we have here in Oakland and this ruthlessly hyper-capitalist country.”

Since 2004, the EBFA has supported more than 300 new works created by 360 individual artists, leveraging a total of $3.5 million for local artists and arts organizations in the East Bay. In the past three years, under Giles guidance, in addition to a racial equity focus and making funding more accessible, EBFA has adapted to COVID-19 limitations.

“One thing we learned coming out of the pandemic is just how hard-hit the artists were,” Giles says. “We started thinking outside of the box. There’s no point in being rigid and solid about the [one-year] agreement, things have changed… and we’re living in a different world. This is an artist’s work, it should be a celebration, not a chore.”