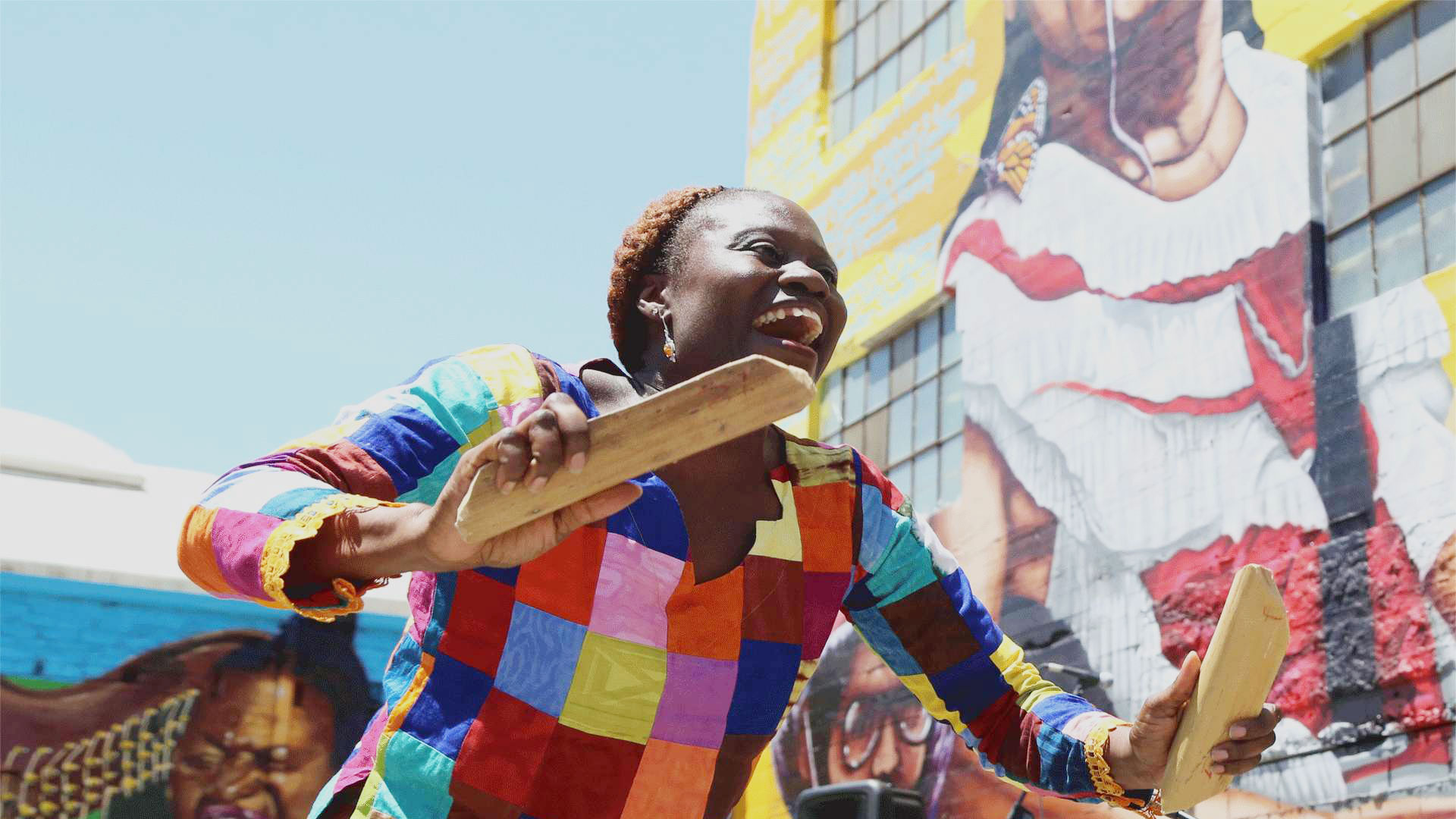 Photo above: Esailama Artry-Diouf from the West African group Diamano Coura dancing in front of what was the original “Universal Language” mural at the corner of 14th and Alice streets. Credit: Ayse Gursoz

The East Bay Community Foundation (EBCF) has been a long time proponent of the arts as is demonstrated through partnerships with our donors and fellow foundations that work to support the arts across Alameda and Contra Costa counties. From 2000 to 2015, East Bay Community Foundation (EBCF) and its then affiliate, the Open Circle Foundation, commissioned the eight pieces of public art, among many others. These creative expressions build community resilience and power, and they give voice, agency, and visibility to communities most harmed by oppression.

We invite you to take a look at the eight murals below and learn about the impact they had in the physical space and communities around them.

This 2014 project is a large-scale piece of artwork on three walls at the corner of 14th and Alice Streets in downtown Oakland. It depicts inspirations from the historic Oakland artistic community, with a focus on the Malonga Casquelourd Center for the Arts and Hotel Oakland. The intention of the work is to educate the people of Oakland and visitors of the rich history of this part of Oakland and honor those who’ve contributed to it.

Year of the Dragon Mural

Commissioned in 2013, The Year of the Dragon mural was proposed as the first of 12 potential murals in Oakland’s Chinatown featuring the animals of the Lunar Zodiac. Artists and community members identified some of the most vandalized walls in Chinatown, and envisioned murals to not only prevent graffiti vandalism, but to also promote cultural pride, local arts, and neighborhood business development.

Completed in 2011, two murals were installed for which the Desi Mundo and Community Rejuvenation Project worked with community members to finalize designs and involve them in a “paint your piece/peace” process. The process involved mapping out designs into small individual blocks which were then assigned colors and painted by individuals in the community, culminating in mosaic-like works. The intention of involving the community residents was to reflect their heritage and enhance community pride in a neighborhood that has long experienced poverty and blight. Unfortunately, the works were covered by graffiti in 2013 and were painted over because they could not be restored. There is no guarantee specific public art works will outlast the forces of social destruction in the short run, but art cannot be suppressed in the long run.

Completed in 2012, the project funded an additional mural work on the columns at 54th Street and Shattuck Avenue in Oakland. This project extends the aesthetic established on 52nd Street and brings the feeling of motion, a celebration of local place, and color therapy to the neighborhood. The highway crosses Shattuck at an acute angle making it an ideal place for a bold artwork. This project gives expression to new variations of wave forms, color tapestries, and organically unfolding images that recall the Temescal Creek and other patterns of nature in the urban fabric. The Open Circle Foundation has commissioned a new branch of the Temescal Flows mural that was funded in Spring 2014.

Annemarie Baldauf led students in the creation of six, permanently installed mosaics outside of the gym at Riverview Middle School in Bay Point. Students participated in a year-long process to make the mosaic and apply learnings from their art program, and ultimately see their art become part of their campus environment.

Completed in 2010, EBCF and People’s Grocery commissioned a community mural project at the California Hotel garden. This was the first attempt by People’s Grocery to connect visual artists with community residents as a way to promote community ownership of local urban agricultural sites.

RYSE Center is a safe and welcoming recreation space for West Contra Costa youth that aims to build youth power and leadership towards personal and community health and transformation. Members of RYSE’s Youth Leadership Team worked directly with Trust Your Struggle artist Robert Trujillo and Arts Change on all aspects of creating the mural – from identifying and developing the concept and story, sketching mural design on paper, outlining onto RYSE’s exterior wall, to painting and executing the project. RYSE Center organized an event inviting youth, adult allies, community residents, and other social services providers to see the mural’s unveiling in 2010. The event and the mural provided an opportunity to celebrate youths’ efforts and increased awareness of the needs and priorities of youth.

Completed in 2006, the project consists of social commentary murals completed by Oakland High School students in the Visual Arts Academy.

The murals address the United Nations’ Millennium Development goals including: the eradication of poverty and hunger, the achievement of universal primary education, the promotion of gender equality and the creation of environmental sustainability. Images capture hope and possibility by illustrating the works of Nobel Laureates who have addressed some of the most pressing issues of our times.

About the Open Circle Foundation

The Open Circle Foundation begins with the belief that art can constitute a vital force in the lives of individuals and communities. The Foundation seeks to encourage dialogue between the arts and the natural and urban environments by supporting projects that link the arts, the natural world, and local communities.

About the East Bay Fund for Artists