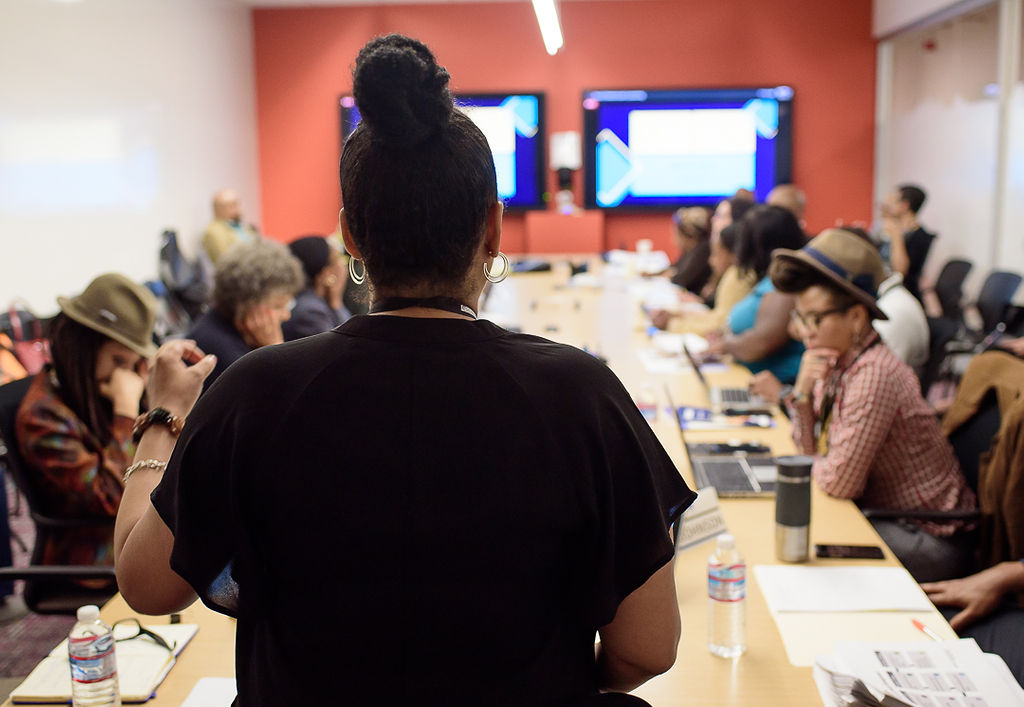 Bay Area Black-led organizations (B.L.O.s) make up a strong, vibrant network of community anchors that have served as the backbone to the communities most affected by the economic and health effects of COVID-19.

The fact that Black-led organizations were, and continue to be, an essential part of the crisis response efforts is not an accident. The majority of these organizations were established to respond to the preexisting conditions of institutional racism and disinvestment impacting the social determinants of health of the communities they serve. But we must stress that BLOs’ ability to respond and adapt quickly is not sustained by their willingness and drive to help. It is, however, contingent on their infrastructure, capacity, and access to funding.

Roots Community Health Center, a nonprofit organization dedicated to reducing health disparities in East Oakland is expanding its outreach with new infrastructure from the additional funding it received during this pandemic. Roots Community Health Center’s Chief Operating Officer Aquil Naji says, “So that [large influx of funding] has justified us hiring a new development and planning director to capture the opportunities of the day. And I think this is going to really push our agenda much further down the road.” Naji added that they want to achieve sustainability. Naji says, “And all right, we have a financial agenda too… [it] has really helped us because now you have more and more people who are willing to go into the communities and lend a hand. So when they do knock at the door, we have a complete team.”

While many BLOs reported an influx of donations to support COVID-19 crisis response and social justice work, historically BLOs have had significantly less access to capital than white-led organizations. A study conducted by A Philanthropic Partnership for Black Communities indicated that between 2005 and 2014, “giving to African Americans as a percentage of giving to people of color declined from a high point of 21.8% in 2005, to 17.5% in 2014.” (Emergent Pathways, LLC., The Case for Funding Black-Led Social Change). Such a decrease has affected BLOs’ ability to plan for the future and be prepared to respond to any crisis affecting the communities they serve. In the Bay Area, the decrease became even more evident after the 2008 recession, and even though there were signals of recovery, a report issued by Bay Area Black United Fund, corroborated that out of 125 Bay Area BLOs, “42% of budgets increased in 2014 vs. 2013 however more budgets decreased than remained the same (32% and 26%, respectively).” (Walker and Associates Consulting, LLC., Black-Led Organizations In The Bay Area: From Crisis To Change).

Today, ASCEND: BLO and the network created by it have proven to be an invaluable pillar to Bay Area BLOs as they continue to support the communities most impacted by the pandemic. Current data from Alameda County’s COVID-19 dashboard confirm that Black residents are one of the ethnic groups with the lowest vaccination rates, and high positive cases continue to be in geographical areas with a predominantly Black population.* Similarly, Contra Costa County COVID-19 dashboard shows Black residents, in the top two groups with the highest infection rates, following Latinos.

As we carry on crisis response and recovery efforts, it is imperative that we consider a long-term investment in BLOs in order to achieve an equitable recovery. The social problems and injustices we face today took generations to create, and we understand that it will take urgent and continued investment to respond to long-term needs and root causes.

Byron Johnson, ASCEND: BLO Senior Program Director at EBCF, states, “It’s always been about supporting Black-led social change. Now it is important for donors to know that this is cyclical…not just what we’re doing this year, but a longer-term commitment.”

You can support Black-led organizations today! There are more than 380 BLOs in the Bay Area, most are mature (10+ years), with the majority located in Alameda County, and most are based in Oakland.

Visit our directory of Black-led organizations to learn more.