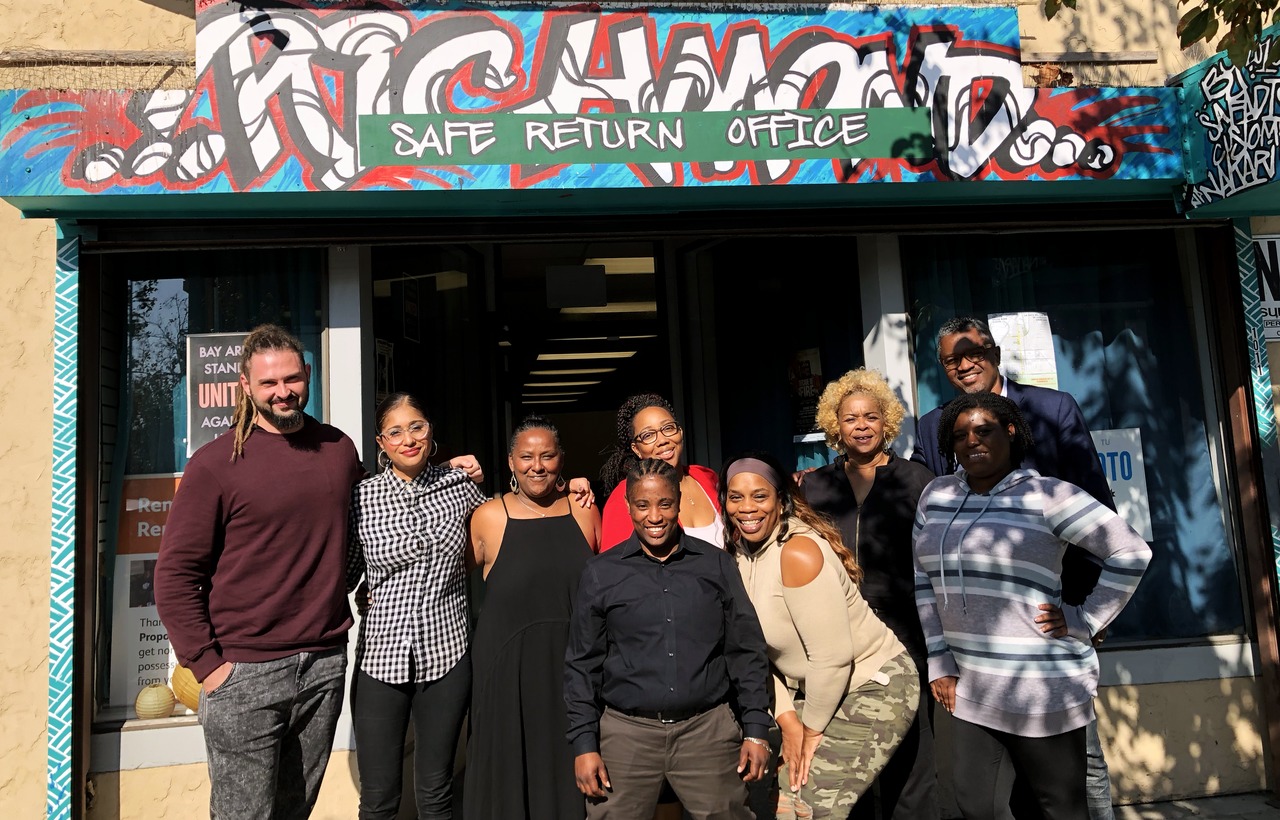 The Safe Return Project, a Richmond-based organization, is a grantee of The East Bay Community Foundation. Led by formerly incarcerated women, Safe Return Project addresses issues surrounding reentry and policy work meant to dismantle the criminal justice system. In an effort to uplift their work, the Foundation has been intentional about crafting authentic content in hopes of drawing greater attention to issues impacting local communities. Our staff recently spent an afternoon at the Safe Return Project’s offices where the Foundation engaged in a dialogue around the growth of their organizers; both personally and in their communities. Below is an excerpt of the conversation conducted during that visit.

Q: How has the Safe Return Project impacted you?

Adey: “During my contact with the law, I didn’t know how to self-diagnose my trauma, and I didn’t know I was dealing with those past issues, and the depression and substance abuse issues associated with it. About a year ago, I got in contact with the Safe Return Project’s reentry program, which is where I met their Executive Director, Tamisha Walker. Her curriculum exposed me to government and policy legislation on the countywide and statewide work. I’m learning how to take up space in those places, and to organize our communities to participate in our civic duties.”

Andrea: “I am formerly incarcerated, and I met Tamisha Walker at church. After sitting with Tamisha for about an hour, I was just fascinated by her. She was like a walking encyclopedia. The turning point was when she sent me to Chicago [for a conference with her], and I felt so lost, but Tamisha broke it down for me in laymen’s terms. She showed be that when I became affected by some of the things in the world, I had to become effective [using my own voice].”

Kimberly: “My kids are the most important thing in my life, that is why the case I caught was so painful, because it changed every aspect of my life as a mother. Before that, I was a teacher and now I am struggling with the factors of the system. When I got out in 2015, I did a few programs at some organizations, but they never clicked for me. They were really focused on the men. I remember one day being at a bus stop [after a program ended] waiting to get back to San Francisco when this car pulled up – it was Tamisha [she asked me if I needed help].”

Michelle: “I have been in and out of jail and prison over the years, and I initially got involved with the Safe Return Project through volunteering for their reentry housing program. About one year ago I was accepted into the Richard Boyd Fellowship offered here. During this year I have developed my leadership and learned life skills that have made me a more productive member of society, and an advocate for myself and community.”

Chala: “After I got off house arrest, it was very difficult to find a job. I went through a period of depression and felt like a burden to my family. One day, my impact coach told me about Tamisha and that she was looking to hire an organizer, but I didn’t know anything about grassroots work or who the Safe Return Project was. I was hired in April of 2018, and I have been learning and developing as an organizer since. As I continued to learn more about the organization and their mission and values, I knew this is where I needed to be. Liberating black people and people of color is a passion of mine.”

Q: What are ways in which the Safe Return Project has helped you heal from past trauma?

Kimberly: “You can’t go from a prison straight into a job, because now you’re talking about having another person in your face telling you what you need to do, how you need to do it. If you’re used to this, and then you’re free, and somebody is coming in your face like that. You go right back to where you started from [by fighting]. Being accepted into the Richard Boyd Fellowship gave me the income I needed and skillsets to do whatever I needed to do – whether it’s school, being reunited with my kids, housing, [all while] showing me how I can sustain it all.”

Adey: “I’m currently in the same fellowship at the Safe Return Project that Kim mentioned. I felt like it was designed for me. Before, I didn’t come across anybody who was trying to ask: “What is your problem? What do you need? How are you?” When I was getting sentenced the judge said this makes no sense. You don’t have a record and all of the sudden at 30-something you are now getting in trouble – what happened? That resonated with me. The first thing you learn in the Fellowship is how to break down your own trauma. You are forced to basically take accountability for yourself.”

Q: What issues do you want people to understand about the criminal justice system?

Andrea: “When I went into the system, I had a white public defender. I had a white counselor. I had white lawyers for my kids. I had white everything. During the day of my trial, my whole jury was white. I had to whisper into my public defender’s ear and ask how this happened when I was here for the jury selection. When it comes to black people, we don’t even get a first chance when we are convicted and placed in the system. You can commit the same crime as a white person, and in every instance, you will always be charged more severely.”

Michelle: “I have been fighting for years to try to obtain housing, but because of stipulations regarding having a felony, I’m struggling to provide for my child because of a crime I committed before he was even thought of. I did my time. Got out, got pregnant with my baby, came back home to California. So no, society doesn’t give us a chance period.”

Q: What project is your organization currently focusing on in 2019?

Chala: “The primary focus for 2019 was the work being done around young women of color in the community. We are currently working on developing a report that chronicles the issues women are facing in our community, especially the reasons why they are getting arrested in such high numbers. We know that once they get released, they are likely to find themselves back in the system without resources. We are finding that there are limited services and we want to be able to fill that void.”

Q: What resources do organizers need to make their jobs more effective?

Adey: “As a community organizer you have to have money to take people out for coffee and get them engaged, which means you have to go where they are. It is impossible for organizations to do that type of work because we need to deep dive into the community, and without funding that will not happen. The only way to engage people is by spending money on them and getting them out of their situation so that they will come to meetings and get involved in movement work.”

For more information about the Race, Gender, and Human Rights Fund, click here.