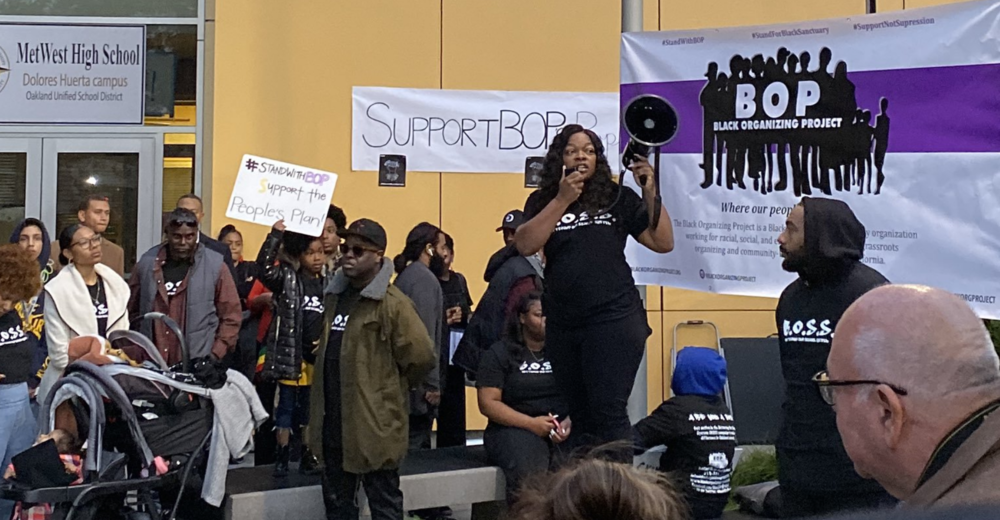 EBCF In The News: Inside Philanthropy

EBCF was recognized by Inside Philanthropy as the 2019 “Boldest Community Foundation.” According to the publication, this designation is rooted in EBCF’s commitment to activism and social movements – a quality not shared by many other community foundations.

Aiming for Greater Impact, a Community Foundation Gets Behind Social Movements

With their geographic focus and home-field advantages, community foundations are well-positioned to deliver on the kind of bottom-up grassroots grantmaking that’s increasingly in vogue these days. But the fact is that the vast majority of community funders don’t embrace edgier approaches. They have a lot of stakeholders to please, after all, and risk thinning their donor ranks when they move closer to politics.

But there are exceptions. Following the 2016 election, several community foundations in liberal metros responded to the fears of the moment by standing up to Trump policies and generally endorsing the “resistance.” While that grantmaking stemmed from liberal donors’ post-election alarm, it also reflected a willingness among blue state community funders to embrace riskier strategies. For some, that willingness is rooted not just in big-city opposition to Trump, but in deep critiques of the philanthropic status quo.

The East Bay Community Foundation (EBCF) is a case in point. EBCF operates in a region roughly encompassing the Bay Area’s Alameda and Contra Costa counties. Earlier this year, it announced its intention to support community organizing and social movements to build power among low-income communities and people of color. We’re seeing the first fruits of that plan with a commitment this month to fund 18 social justice organizations, which EBCF calls its Just East Bay core partners.

EBCF’s move is quite radical. “We wanted to better leverage the philanthropic options available to us as a community foundation to address the widening gap in access to basic human needs,” said James Head, EBCF’s CEO. “This meant engaging in direct campaign work and supporting organizations in their lobbying and advocacy as a means of building power in communities.”

EBCF’s decision follows an extended period of reflection and experimentation. “When I accepted the position of president and chief executive officer in 2014, our staff started examining the ways in which our charitable endeavors had served the needs of our East Bay communities,” Head said. In the face of entrenched challenges to low-income people across the region—including sky-high housing costs, challenges to education access, and a dearth of good jobs—the folks at EBCF realized that they could not carry on their existing approach and expect to make headway on equity.

Soul-searching ensued. “Recent critiques of philanthropy have raised critically important questions about the origins of philanthropy as a tool to preserve accumulated wealth relative to a more progressing approach that embraces an ethos of reciprocity—rooted in mutual sharing and community—in order or to bring about fairness and justice,” Head said.

Head and team recognized early that such an approach couldn’t ignore lobbying and advocacy, the arena where empowered community voices could arguably make the most substantive impact. But with most of its revenue coming from DAFs and private foundations prohibited from directly backing political work, EBCF needed to create new options.
A tactic materialized in 2017 with the creation of the Early Childhood Progress Fund. Developed with advice from legal experts like the Alliance for Justice’s Bolder Advocacy initiative, the pooled fund let private foundations contribute to a project that included both non-lobbying and lobbying activities. The result was a more flexible vehicle that let EBCF contribute close to $900,000 to 501c4 organizations and ballot measures to increase access to childcare and education.

In addition to lobbying and advocacy, EBCF recognized that a more reciprocal philanthropic strategy should involve long-term support to build the capacity of community nonprofits, especially those operating in underprivileged neighborhoods. In 2017, it launched ASCEND:BLO, a capacity-building program tailored to the needs of black-led organizations. To increase buy-in from its individual donor network, EBCF also worked with Justice Funders, a Bay Area-based donor organizing outfit founded on social justice principles.

Those three elements—advocacy and lobbying, capacity building and donor organizing—form the basis of EBCF’s new overall approach. They’re also well-reflected in the cohort of 18 organizations the community foundation is supporting via Just East Bay.

All told, the Just East Bay core partners are getting a total of $700,000 from EBCF. That’s not a whole lot next to EBCF’s overall grantmaking, which totaled around $50 million in 2017. But it is significant considering the typical sum community foundations devote to this type of work, which is nothing at all. And it’s also worth noting that nearly half (45 percent) of that money comes from aligned donations rather than EBCF’s discretionary funding pool.

As for the grantees themselves, some seek to empower disenfranchised racial and ethnic communities, like the Black Organizing Project, Mujeres Unidas y Activas, and Filipino Advocates for Justice. Others focus on particular causes—a few examples include the Safe Return Project, RYSE Center, and Parent Voices Oakland. Still others are pushing for general community empowerment, like the Oakland and Contra Costa chapters of ACCE, Bay Rising, and EBASE. Head said EBCF drew on the community organizing experience of staff on its Community Investment & Partnership team to assess potential grantees.

EBCF has taken concrete steps to broaden the scope of what these grantees can do with the money they receive. If they prefer, they can devote EBCF grant money toward lobbying by channeling it to their 501(c)(4) affiliates. On the funding end, a full third of EBCF’s discretionary component went toward c(4) organizations. EBCF has even estimated the amount of public resources it expects this approach will garner over the next five years: over $250 million.

EBCF’s earnest and undisguised turn toward advocacy may be rare in philanthropy, and it’s even rarer from a community foundation. But it just might be the wave of the future. As we often note, politically conservative funders have been operating close to politics for a long time to the great benefit of their causes. The 2016 election caused many left-leaning funders to question their traditional caution and follow suit. And let’s not forget the rise of alternative giving vehicles from top funders like Chan and Zuckerberg, Pierre Omidyar, and even Gates, often designed with policy advocacy in mind.

ECBF wants to spread the word about “this expanded approach to philanthropy,” as Head characterized it. He hopes ECBF’s approach can be a replicable model for other community foundations interested in empowering communities of color. The San Francisco Foundation is another Bay Area community foundation that’s going all-in on equity lately. Earlier this year, it flexed its advocacy muscles in a big way, taking the lead on the Partnership for the Bay’s Future’s Policy Fund.

These developments are taking place amid a broader expansion of regional funders’ financial heft. As we’ve written before, heightened wealth inequality has swelled the ranks of the seriously rich, and by extension, the coffers of community funders. But even as more big donors appear on the scene, community foundations’ value add may shift as streamlined digital services for donors become more prevalent, as EBCF notes in a report on its strategy shift. Donor services may morph into donor organizing that draws on community foundations’ in-depth local knowledge.

In fact, what we might end up seeing is greater variation in how community foundations operate and what they fund, reflecting donors’ political sensibilities in a more polarized age. Satisfying everyone may be impossible for those with edgier strategies. “We are committed to scaling up our funding for social justice movements, and are aware that EBCF’s new mission, and ultimately vision, will be challenging for those that have historically seen our foundation in a different light,” Head said. “Our leadership team understands this is to be expected, and that in order to make true change at scale, we must be change-makers in the field of philanthropy. “