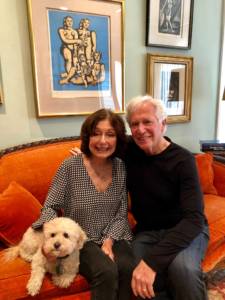 Long before their individual and joint philanthropic endeavors – long before they’d even meet – husband and wife John Steinfirst and Sharon Collins had both committed their lives to progressing the cause of social justice.

Sharon grew up in an enclave of Miami Beach, Florida with her younger brother and single mother. She witnessed firsthand, life’s challenges and fragility. Despite this, she was raised to face the world with – above all else – empathy. “My mother was a tough, hard-working woman, but she was always helping people however she could. She taught me to do the same,” Collins says.

More than 1,000 miles north in the “Steel City,” John Steinfirst was similarly being raised to do the right thing in his hometown of Pittsburgh, Pennsylvania. Looking back, John is able to appreciate the “quiet radicalism” his parents practiced when it came to social justice. He recalls vividly, dinner conversations about issues of racial inequality and the anti-Semitism that proliferated this time in American history. Through it all, John’s parents always modeled acceptance, compassion, and generosity. His father was president of the Pittsburgh Jewish Federation and chaired an organization for juvenile delinquents. During those days, his parents were the only whites in the neighborhood to invite black friends over for dinner. John fondly remembers when the national production of Porgy and Bess came to town. His was the only family willing to host an opening night party for the cast. The idea of hosting a group of predominantly black artists was a daring decision given the times. His parents didn’t boast about their kindness or progressiveness – and a young John Steinfirst took note. “It’s not what you say that makes a difference; it’s what you do,” Steinfirst says. “When something is the right thing to do, you just do it.”

John’s own efforts to achieve a more just and equitable society – like his parents’, are often understated and humble. It is perhaps no wonder then, that Steinfirst rarely talks about his experience as one of two white students to participate in the nation’s first Woolworth’s counter ‘sit-in’ in Durham, North Carolina – a mere six (6) months before the more famous one in Greensboro, NC. As a young college student, while picketing that day, a fellow Duke University student – someone he knew – walked by, and in a symbol of opposition, spat in Steinfirst’s face. He says he was shocked, but not deterred. “I was raised to be a resilient and independent thinker, and I knew I was doing the right thing,” he says. “Looking back, I guess it was courageous, but I never thought about it that way. The real heroes were the courageous, young black students, and adults who were on the front line in their pioneering actions.”

Steinfirst went on to devote his life to helping transform local communities, working his way up the ranks from childcare counselor, to social worker, to clinical supervisor, to program director, until he was eventually named CEO of Oakland’s Fred Finch Youth Center, an organization that provides mental health, social and health services, and affordable housing and health services for trauma-impacted children, adolescents, and families. Steinfirst retired in 2008 after 20 years as CEO. Currently, he is Board Chair of Bay Area Community Services, based in Oakland, that provides mental health, adult day programs and innovative and comprehensive housing programs for the homeless in the East Bay.

Collins bursts with dubious laughter when her husband mentions “retirement,” as his post-retirement career as an expert witness on “standards of care” keeps him more than a little busy. John says it’s hard not to become completely absorbed into cases of systemic institutional abuse or neglect. Despite decades with his arms wrapped both literally and figuratively around children and families facing unbelievable hardship, Steinfirst has never become immune or desensitized to injustice. There is always more to learn, more to do. “Unless we do what we can to help humanity in our own way, what is the purpose of our earthly lives?” he asks.

In her own accomplished career, Sharon directed the philanthropic foundation of an American corporation. After Steinfirst/Collins relocated to San Francisco in 1984, she worked at three different California State Universities and the United Way, completing her career as a program officer with a major Bay Area foundation. During this time, she came to appreciate the agencies and individuals on the ground “doing the direct work” to make change in ways both big and small. She witnessed the impact of corporate philanthropy both infusing and starving these organizations’ coffers, and a desire to avoid the latter has contributed greatly to the couple’s philanthropic approach in this stage of their lives. The two continue to invest both their time and resources into organizations working to improve their local and neighboring communities, including donations through the East Bay Community Foundation via both unrestricted gifts and their family Donor Advised Fund, which they created last year.

When asked why they choose to focus their philanthropic efforts on the East Bay rather than San Francisco (which they’ve called home for the last 35 years), Steinfirst and Collins are quick to return to the issue of inequality, in spite of – or perhaps because of – the recent economic boom in the area. “I used to drive every day from San Francisco to the office in Oakland, and I used to sometimes see groups of kids dealing drugs on the streets first thing in the morning. It was heartbreaking,” Steinfirst says. “Many of our young people are bright and enterprising yet are confronted with an environment that often chips away at their potential. This sense of desperation and violence in our communities is one of the biggest domestic problems we face. We have to start addressing the structural elements of these challenges.”
“The East Bay faces much greater inequity than San Francisco does,” Collins says. “It’s simply where people most need resources and help.